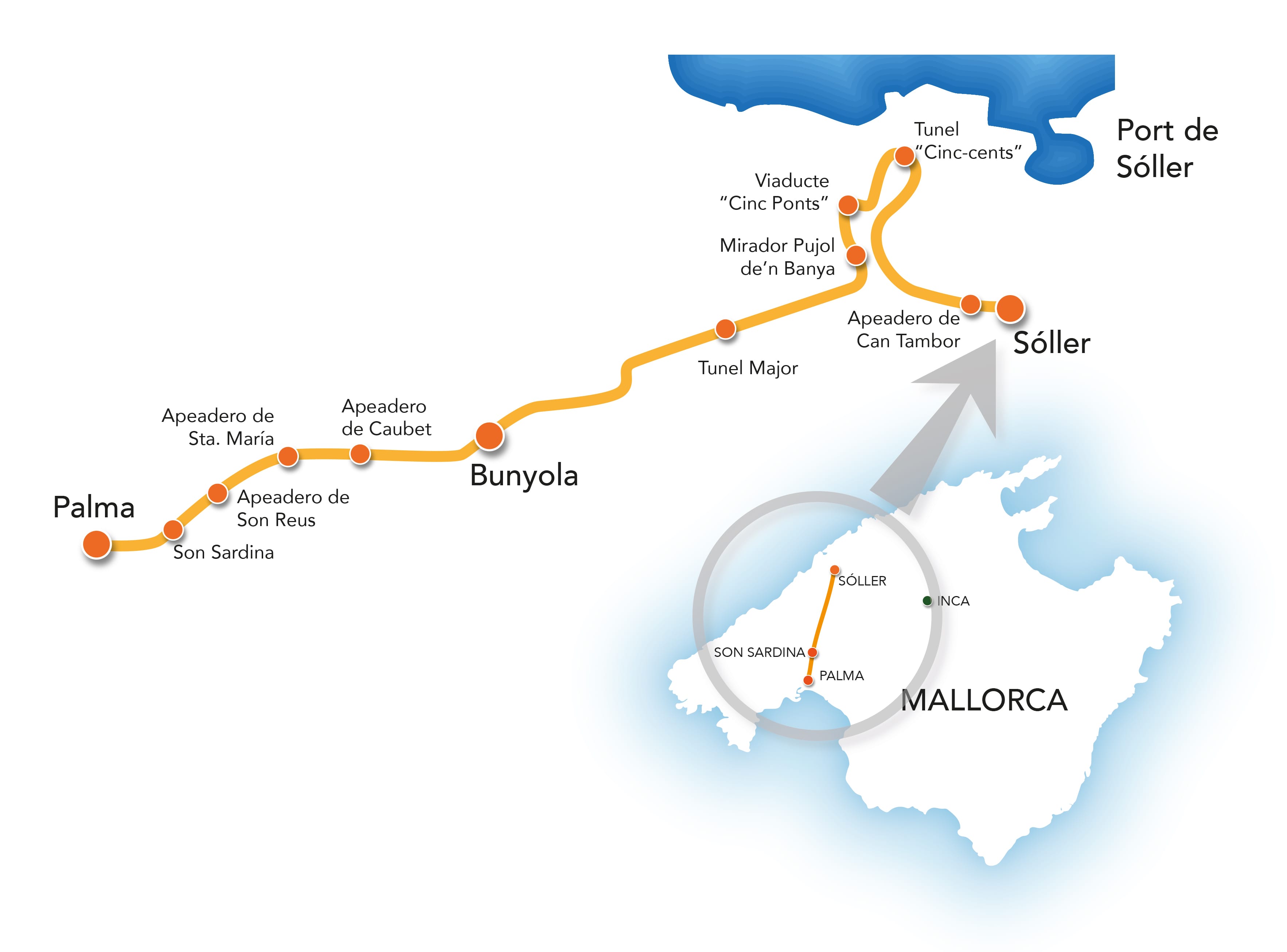 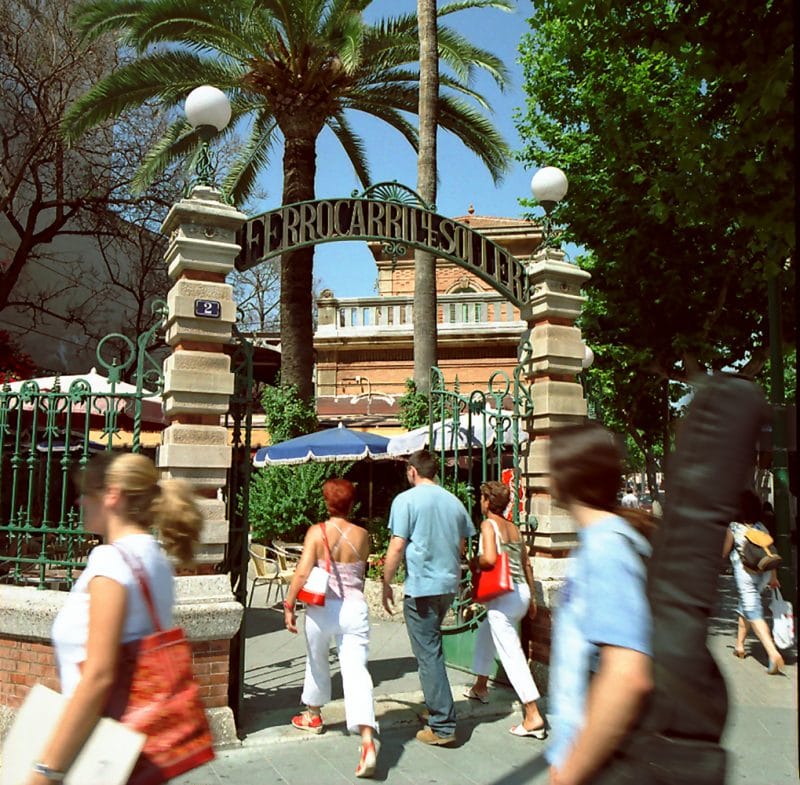 Train ride to the heart of the valley, get on and let yourself go...

The station of Palma de Mallorca

Just by crossing the threshold of Palma station you feel transported back in time. The unique railway enclosure is an oasis of tranquility in the midst of the hustle of the city.

The station, located next to one of the nodes of Palma de Mallorca, the Plaza de España, is composed of a modernist building of three bodies, the depot and the space of the tracks, where a locomotive or passenger wagon often rests.

If you arrive with enough time, from the platform, covered by a canopy that offers shade and shelter to the traveler, you can contemplate the maneuvers of the coupling of the railcar to the rest of the convoy, a process that, between the trumpet blasts of the guards and the serious beeps of the old machine, has been repeated daily for more than a century.

You can also visit the exhibition "50 landscapes of Mallorca", a pictorial exhibition that covers the walls of an old garage reflecting the vision that important local and foreign artists have had of the island's nature. 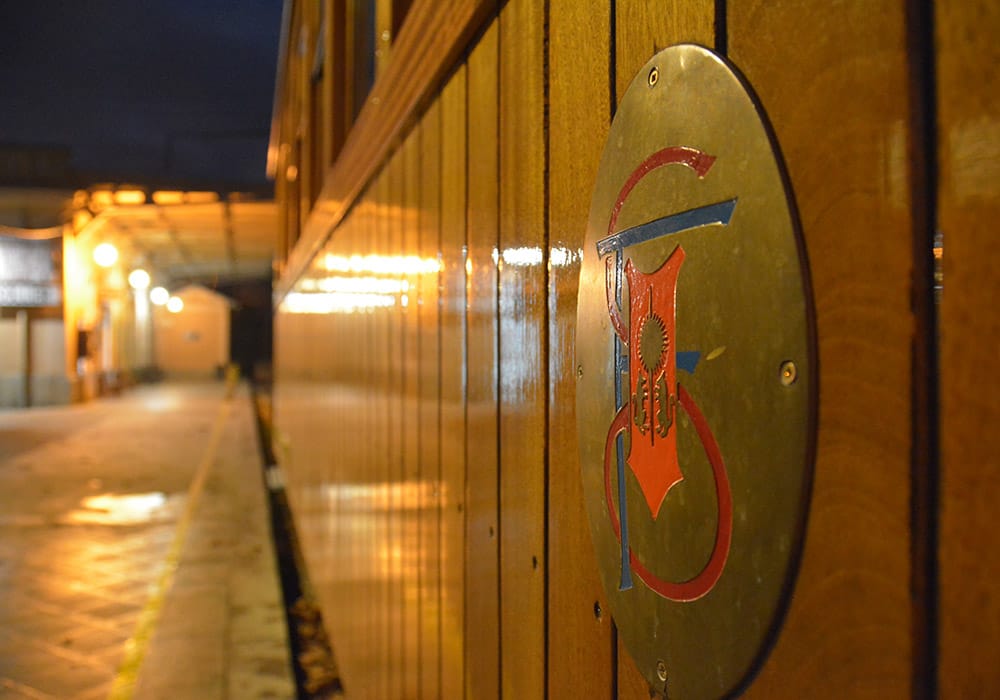 A travel in time

It's time to start your journey. You climb two shelves and, already on the wagon platform, you enter the interior through a glass door: floor, walls and ceiling of lacquered wood; sash windows, gilded sconces and leather and metal seats.

The Sóller train has retained the same appearance since its inauguration, thanks to the continuous care and craftsmanship it has received over the years. The seats can interchange their position so that the traveler can choose whether to sit facing his group mates or separately, depending on the direction of travel. In the first-class wagon, sofas replace the seats, making the trip even more comfortable. A unique rolling watchtower point for contemplating the Mallorcan landscape, with the taste of the "Belle Époque".

You start the trip. An hour-long journey that takes you to another time and another Mallorca. To the time when things happened more slowly and the train was a modern artifact that represented the future and progress. To the Mallorca of the grandparents, the most unknown, the agricultural and traditional one, where nature is sculpted stone by stone, plot by plot, to be able to extract all the fruit of the sowing. 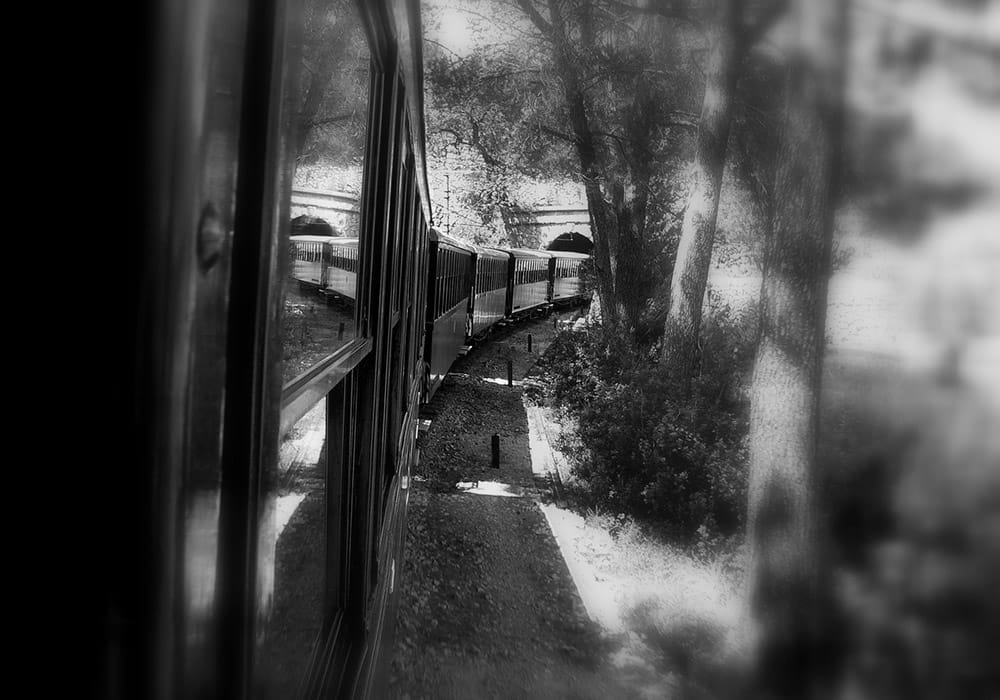 After a few minutes of urban travel, the train of Sóller crosses the last suburbs of the city and leaves it heading north, towards its destination in the heart of the Serra de Tramuntana. The first stop is at the station of Son Sardina, a rural parish of Palma.

Once out of the city, the iron road goes in a straight line into the Mallorcan countryside, the Part Forana, as the islanders call all the territory that does not belong to the capital. On both sides of the convoy, the landscape, with the backdrop of the mountains in the background, is covered with fields of carob and almond trees. The latter, when in bloom at the beginning of February, constitute one of the typical postcards of the interior landscape of Mallorca. 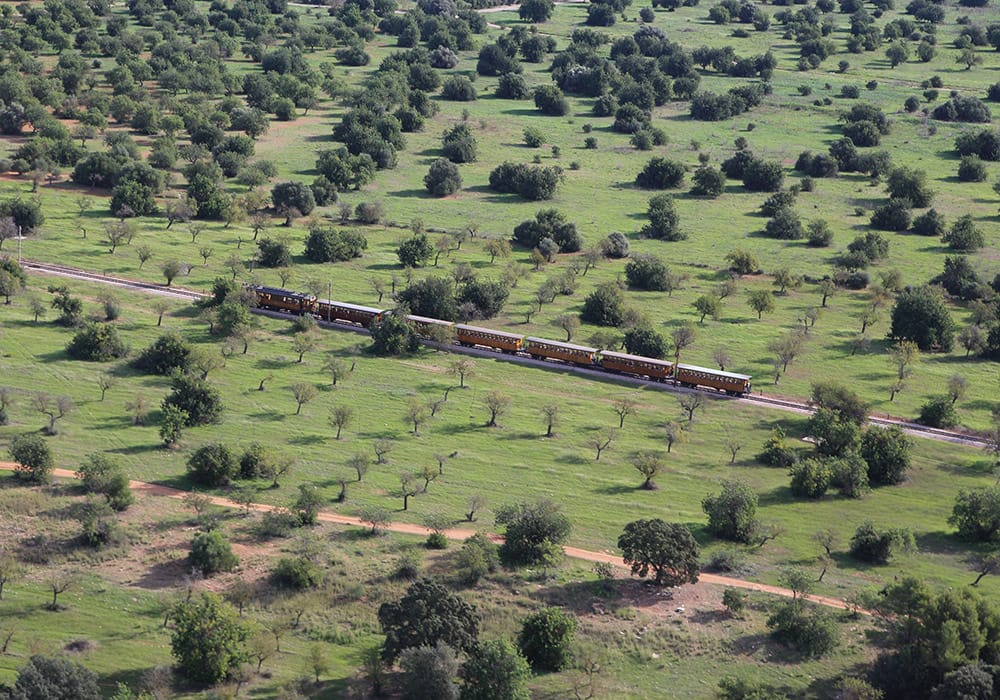 Once past the Santa Maria and Caubet road stops, the track enters a Mediterranean pine forest and ends in the village of Bunyola, built at the foot of the Serra d'Alfàbia. Its station is preserved as it was erected more than a hundred years ago, with a stately main building and a transformer substation from 1929. At the foot of the station are gardens and lemon groves that fill the air with citrus scent.

Leaving Bunyola, three buildings stand out: Sa Torre or Villa Francisca, in modernist style; s’Alqueria d’Avall, a typical Mallorcan mountain estate, and the Alfàbia farmhouse, a house dating from the times of the Arab domination surrounded by Andalusian-inspired gardens. 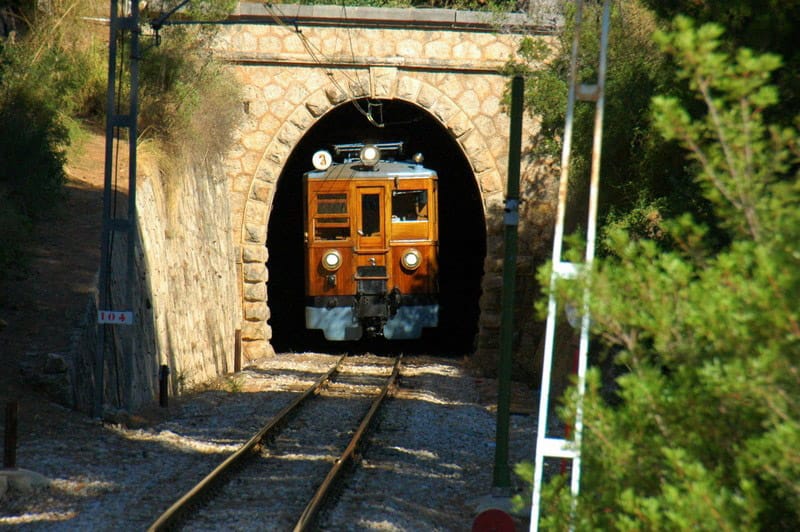 However, the most spectacular part of the route is still to come. Leaving Bunyola behind, we can observe a change in the landscape, as we enter the olive groves, characteristic of the Serra de Tramuntana.

They are centuries-old olive trees, with wide canopies and thick trunks sculpted by time, with the singularity that they are planted on the slopes through the construction of terraces supported by dry stone walls, held without mortar, called "marges" in Catalan. This human modification of the natural environment that staggers the slopes of the mountains to make them arable is one of the peculiarities that have made the Serra de Tramuntana a World Heritage Site in the category of Cultural Landscape.

The train plunges rattling into the landscape through a trench dug in the rock and crosses the first of the thirteen tunnels drilled to save the rugged geography. The next one is the longest, with an extension of almost three kilometers.

Inside, the railroad reaches the highest point of its route, about 200 meters above sea level. The lamps are lit inside the wagons; outside, it is pitch dark. Pushed by the plunger that makes up the convoy, the air howls like a ghost trapped inside the mountain. If we open our window slightly, that humid breeze, with the smell of moss and fern, blows cold, while the blackened walls of the tunnel slide swiftly a few centimeters from our faces. 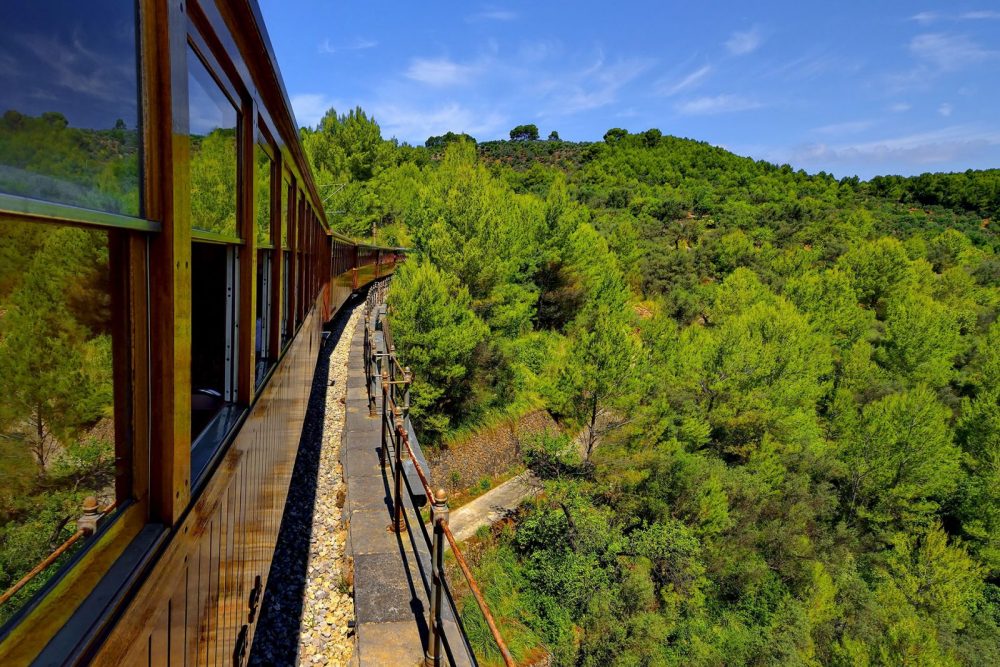 Descent into the valley, photographic carousel

A few minutes later, the train appears on the slope of Sóller in a burst of light and greenery. We are still in the mountains, surrounded by olive groves and pine and oak forest, circulating along the wall of a hollow that precedes the valley. Now it's time to meander along the slope for a gentle descent to our destination. Tunnels, bridges and viaducts make it possible for the road to overcome the numerous obstacles and natural slopes.

To our right expands the Valley of Sóller, covered with orange and lemon groves, surrounded by the high mountains that are cut out of the sky: Serra d'Alfàbia, Es Cornadors, L'Ofre, Serra de Son Torrella and the imposing mola of Puig del Migdia, which majestically presides over the spectacular panorama.

Like a carousel of photographs, each exit of a tunnel offers us, from a privileged height, a new perspective of the lush valley, the unique village and the rugged mountains. The same unrepeated landscape that appears and disappears before our eyes by the magic of the curvilinear layout. 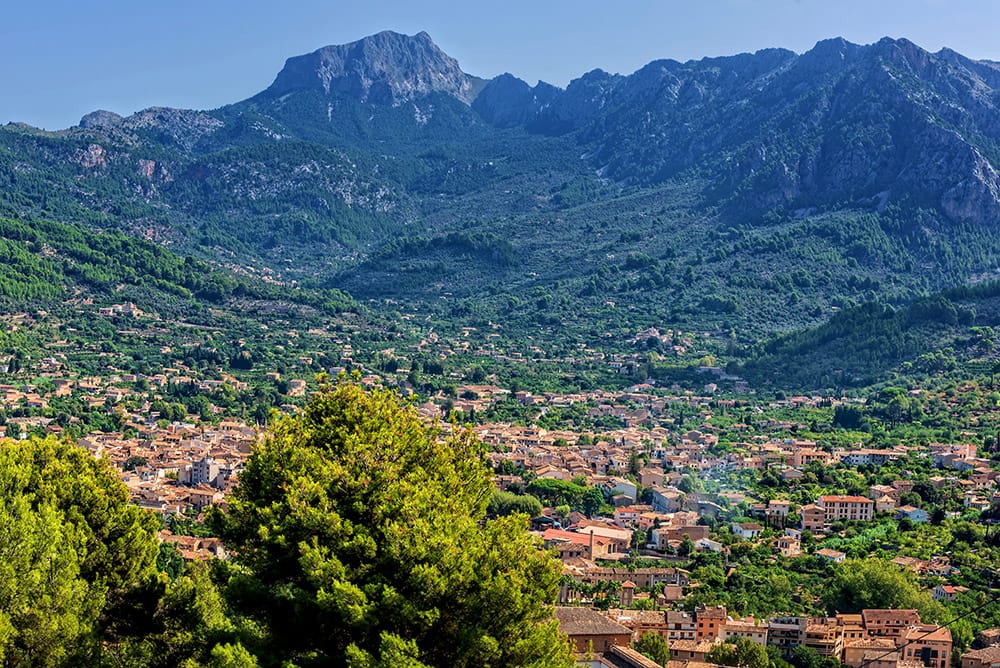 On the slope of Pujol d'en Banya, the special train (ask for information at the ticket office in Palma station) makes a technical stop of about ten minutes that gives us the opportunity to get off the train to observe and take a picture from the viewpoint the open landscape at our feet. 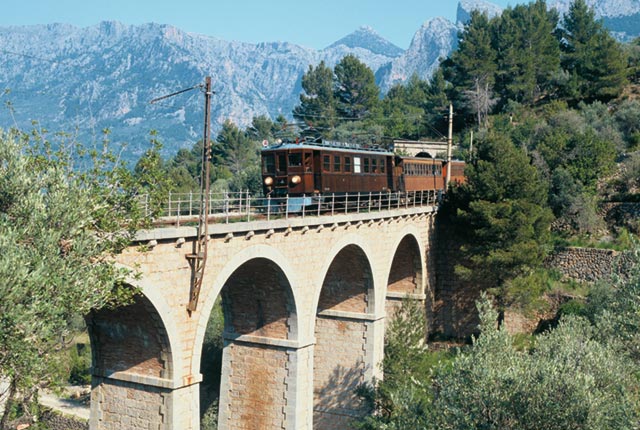 Discovering the magic of the layout

After resuming the march, the train is suspended over the curved viaduct that crosses the Torrent dels Montreals, popularly known as "els cinc ponts" for its five masonry arches. Further on, it enters the "500" tunnel, so called because it is half a kilometer long. Its layout draws a turn of almost 180º, so that at the exit of it, almost surprisingly, the valley reappears on our left. 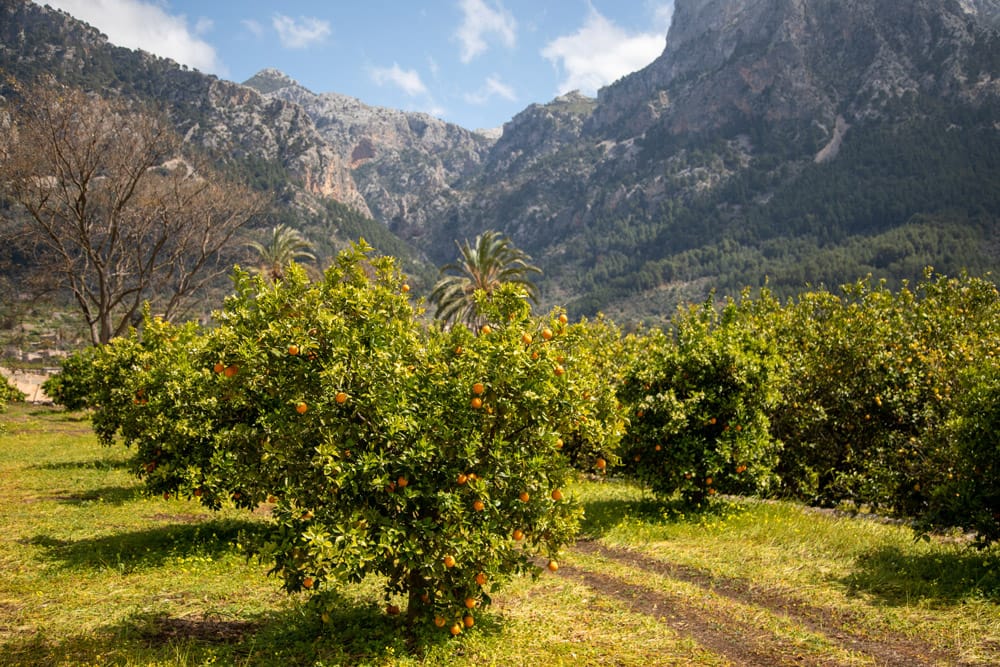 The convoy already circulates near the village, crossing small orange groves, until, having passed the last tunnel, it glides placidly to the station of Sóller.

The city boasts of growing the best oranges in the world, whose export to France and other European countries flourished in the nineteenth century, which motivated the emigration of many sollerics to France and, therefore, the influence of French culture and fraternal ties with that country.

The train announces with a final whistle its entry into the station, marked by the sight of the various elements that compose it: the depots, the workshops, the warehouses, the track crossings and the loading docks. Beyond, the power substation that powers the entire railway line..

The passenger descends to a wide platform under the shade of the enormous trees that shelter him. To go down to the Plaza de España, where the first stop of the streetcar to the Port and a railway carriage where the municipal tourist information office is located, the traveler will cross, by means of a long staircase, the main building of the station, the large house of Can Maiol.

This house dates from the seventeenth century and has been, over the centuries, a defensive fortification, factory and hostel, among other uses. Despite the reforms of adaptation to the new functions, it still retains its traditional character. On the first floor you can visit the Miró and Picasso exhibition rooms of the Tren del Arte Foundation, with original works by the two universal artists, free of charge.

The trip is not over. We still have many opportunities to visit and walk around. Sóller offers us its modernist buildings, its spectacular church, its always busy central square, its cobbled streets, its traditional stores and museums. And the tramway invites us to another unique trip to the Port.