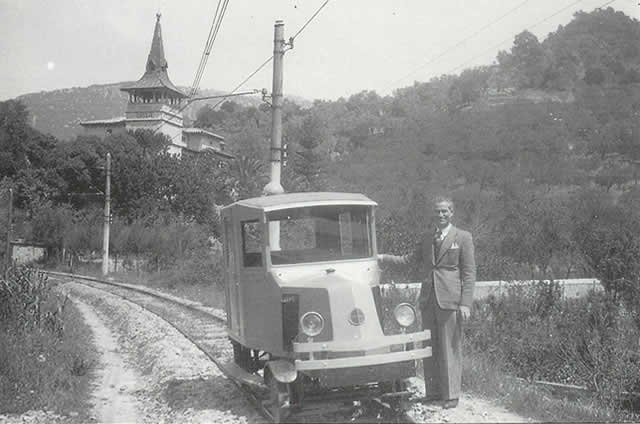 At the beginning of the 20th century, the town of Sóller, with its thriving industry and its famous orange groves, needed to put an end to the virtual isolation that hindered its development. The majestic setting of the surrounding mountains, and in particular the Sierra de Alfàbia, prevented the transport of passengers and goods to the port of Palma and the rest of the island, which by then was already structured by a growing Mallorcan railway network.

It was a citizen of Sóller, Mr. Jerónimo Estades, provincial deputy and businessman, who echoed the will of the inhabitants of Sóller to implement a railway system between Sóller and Palma de Mallorca. He initially commissioned the study of a Palma-Sóller railroad passing through Valldemossa and Deyá. The concession of this railroad was then requested in 1893. However, this project was ruled out due to the high economic cost it represented.. 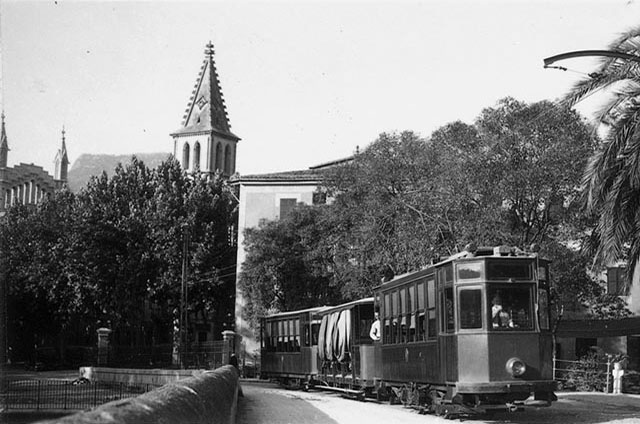 The construction of the railroad was entrusted to the building contractor Mr. Luis Bovio, who bought from Ferrocarriles de Mallorca a small locomotive 020T built in England by "The Falcon Engine & Car Works Ltd.,Loughboroug" manufactured in the year 1891 and with the factory number 198, this small locomotive was used as a shunting tractor in the port of Palma on the tramway line that crossed the city of Palma. This small locomotive was baptized with the names of his daughters: "María Luisa", such has been the prodigious service of this locomotive, that even today its exploits during the construction of the railroad are remembered;

The works began on June 3, 1907, starting the works simultaneously from Palma and Sóller. After a year the brigade that had left Palma reached Bunyola, where they faced the main challenge of the line: the Sierra de Alfàbia, which had to be crossed by a 2856 m tunnel that would lead to the other side of the winding "Coll de Sóller". Several tunnels and trenches had to be dug. On August 19, 1911, the victorious locomotive Maria Luisa had arrived at the viewpoint "de's Pujol de'n Banya". The first work train arrived in Sóller on September 30th of the same year.

The small locomotive María Luisa had the privilege of unofficially inaugurating the line, carrying a saloon car loaned by the Majorca Railway Company with the names of the concluded project: Mr. Jerónimo Estades, Mr. Pedro Garau, together with Antonio Maura, on October 7, 1911. 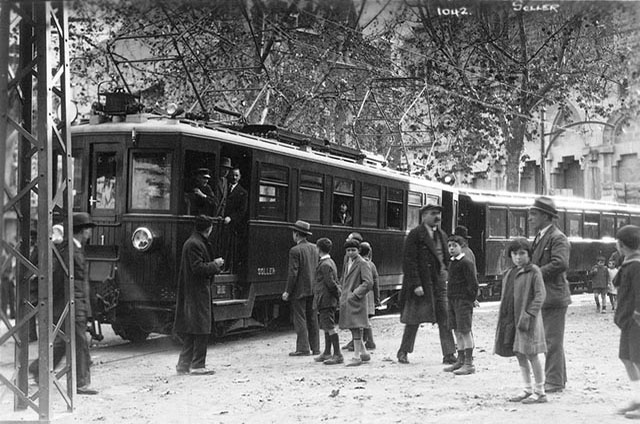 The official inauguration took place on April 16, 1912, being the locomotives nº 1 "Sóller" and nº 2 "Palma" the ones in charge of carrying the inaugural convoy, while nº 3 "Buñola'' waited for the arrival of their counterparts in Sóller. All the rolling stock of the Sóller Railway was in operation that day, the three locomotives of the Maquinista Terrestre y Marítima (M.T.M.) and the six cars manufactured by Carde&Escoriaza. That same day a maritime catastrophe shocked the world: The legendary "Titanic" had sunk on its maiden voyage.

A year later, a fourth M.T.M. locomotive was added, No. 4 called "Son Sardina" (at the end of August 1913), and the four remaining cars from the initial order also arrived at Carde&Escoriaza that same year. 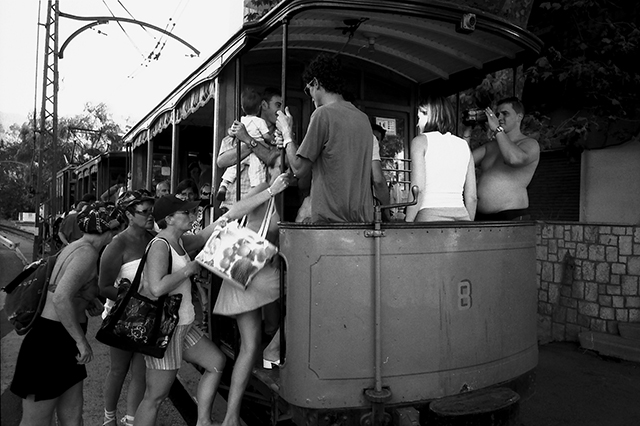 On October 4, 1913 the first electric streetcar line of Mallorca was inaugurated between Sóller and Port de Sóller.

The Sóller Tramway began to be built after the inauguration of the railroad line from Palma to Sóller. The project of this line was designed and directed by D. Pedro Garau, and 4,868 meters of track were laid. The iron bridge over the "Torrent Major" was built by the Maquinista Terrestre y Marítima.

The streetcar initially had its own power station located in the Sóller station itself. This power station was powered by a 65-horsepower explosion engine that drove a dynamo of the house Siemens-Schuckert, giving a direct current of 600 volts.

Although the Sóller tramway was intended for passenger transport, it was also used for freight traffic to the port. In a small isothermal wagon fresh fish was transported from the Port to Sóller and in trailers coal was taken to the old military submarine base at Port de Sóller, to the "el Gas" factory; as well as mines and torpedoes transported from the Caubet powder magazine.

The three streetcar cars numbered 1 to 3 and their trailers 5 and 6 are the originals of 1913 which were ordered from the Zaragoza firm Carde & Escoriaza. The planters were acquired from the Palma tramways in 1954.

In addition, the Sóller Tramway has five streetcar cars from Lisbon, numbered from 20 to 24, adapted to the 914mm gauge. 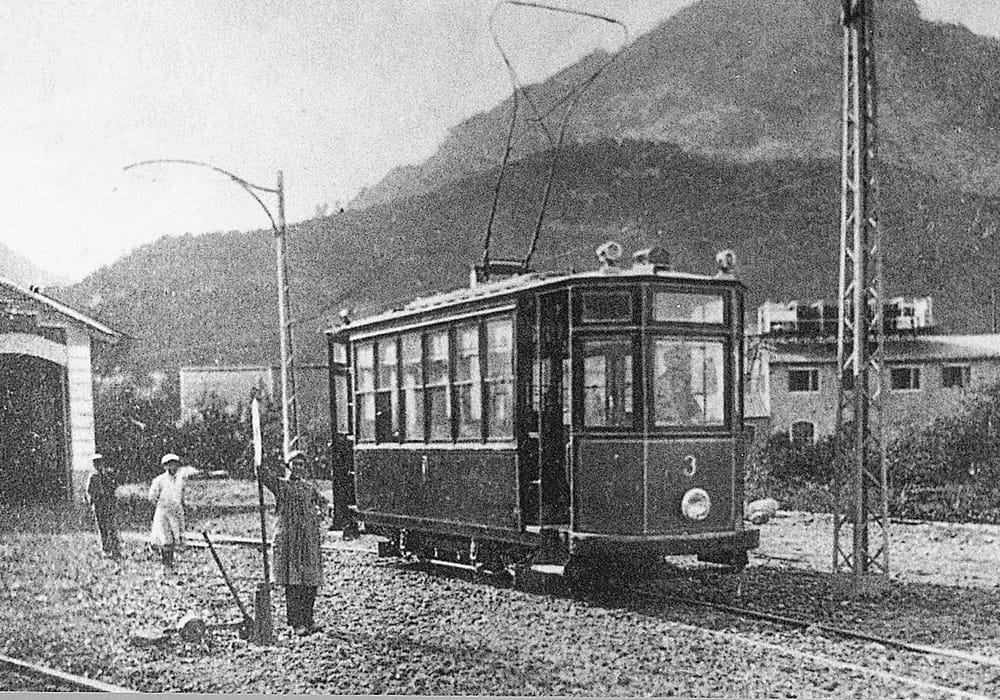 Electrification of the train

On July 14, 1929 the electric traction was inaugurated between Palma and Sóller, hundreds of people came to welcome the inaugural convoy, and in 1930 the first direct tourist services between Palma and Puerto de Sóller could be carried out in trips that combined the train and the streetcar. Four brand new Carde & Escoriaza-Siemens Schuckert-Brill railcars of 33 tons and 360 horsepower each.